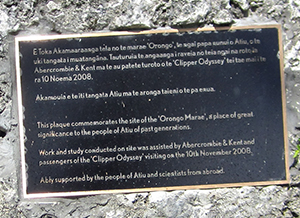 In November of 2008, Abercrombie & Kent and the passengers of the Clipper Odyssey sponsored an archaeological project, implemented with the help of the Atiu people and under the direction of Dr. Hiro Kurashina and Dr. Rebecca Stevenson, to re-establish and clear the location of the sacred welcoming site of Marae Orongo i Tai. I was contracted to record the project progress to make a video documentary. Sadly, today, two of my interviewees have already passed on. The knowledgable elders told us about Ava Tapu, the Sacred Harbour, and the function of the adjacent sea-side marae.

In pre-European times, when a foreign canoe approached, it was never known whether the seafarers came as friends or as foes. On the inland marae  in the district of Mokoero across from the chief’s court, the priest consulted the gods.

If it could be assumed that they came as invaders, a huge stalactite , now sleeping in the weeds at Marae Orongo, was erected as symbol for the war god Tutavake.

The god’s head – today located on top of the marae’s platform – placed on top of it. Fierce battles ensued in which the brave Atiu warriors remained victorious. Papa Sam Koronui told us that, presumably, cannibalistic rituals then  took place at Marae Orongo i Tai. However if the voyagers were relatives or came as friends, a feast was prepared for their welcome.

As the fate of M/S Edna shows, access to the island at Ava Tapu landing is tricky because of treacherous currents. Once the voyagers made it safely across the coral reef, they would have to ascent to the island through a narrow passage (left) framed by razor sharp fossilized coral. The late Papa Ina Teiotu told us that the seafarers were ‘fumigated’, i.e. they had to walk through smoke (scented with sandalwood??). Women decorated them with sweet smelling flower ei, crowns and necklaces, before sharing food and refreshing coconut water at the welcoming site to celebrate their successful journey and safe arrival.