…is the motto of the exhibition. And surely, for me this much appreciated challenge has been a step forward.

Going back to the beginning: newspaper as material. Cool!. How could I use it? It was clear that it would have to be “my way”, i.e. sewn lace. However paper is fragile. What to do about it? 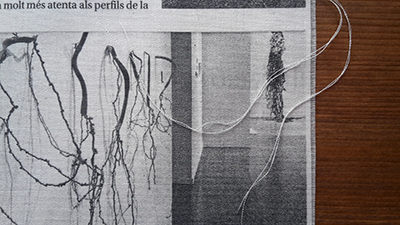 I could print a newspaper extract onto fabric (left).I wanted it to be a meaningful text, though. Where would I find one in such a short time? And then, what to do with that text? Hmmm, somehow that wasn’t convincing.

The technical question was, how to stabilise paper? With iron-on interfacing (above).

Yes, this did work, however, where was the message? I could look for meaningful words. Which language should I use? German – my native language, English – a language I sometimes find easier to work in (!), Castellano – the country’s language, or Catalán – the regional language I am only just beginning to learn and love?

No! All the languages I speak, I decided. Then I went in search of international newspapers. 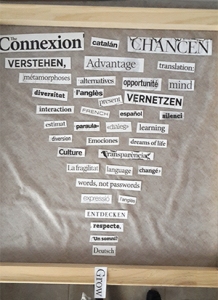 Many interesting articles later I had a good collection of words I could use. I arranged them so they’d transcend the confines of the frame (left). The words could  be sewn (right)…

However,  that turned out to be too labour-intensive for the short time period, so this will become a separate project to be continued… 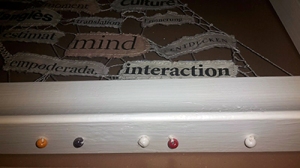 In the end I found words that satisfied me and joined them with machine-sewn lace. I didn’t much like the frame and thought that the natural wood colour made it stand out too much. White paint was the answer. For weeks my workroom smelled of paint! However, it did the trick. I drilled holes in the frame to attach the lace with beads (right). 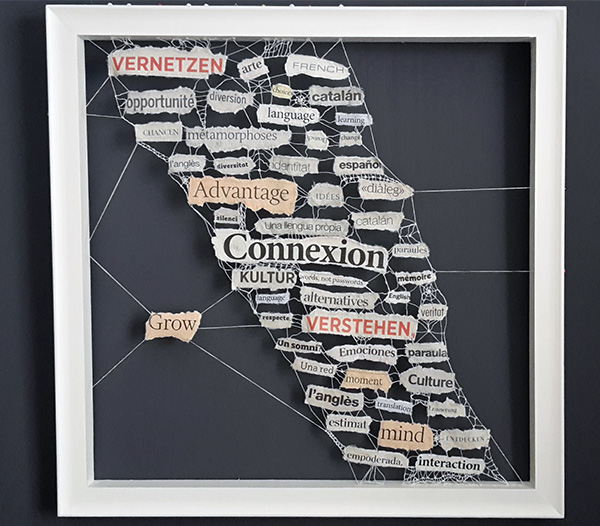 And, voilà, the work was finished. The title came easily: Between Wor(l)ds – my favourite space to be.

My work can be seen during the four days of the Festa Major (city festival) de Matadepera at the Casal de Cultura (culture centre) – between other interesting works of local artists who have also submitted to the challgenge of frame and newspaper. We have all done “un pas més” – another step.

During the time of transition from one side of the world to the other, from island to city life, from wife to widow, from full-time work to (semi-)retirement, I managed to create a wonderful circle of choice family members and friends in my new Spanish home town and nearby. To all these amazing people I owe my sanity. 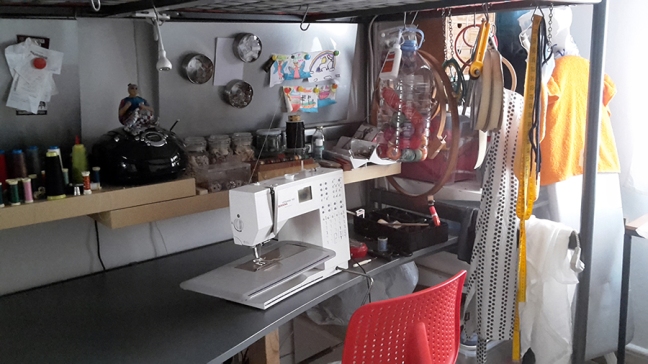 Nearly two years had to pass before I was able to start creating again. I have adjusted to my much smaller workroom (above) and won new artist friends.

These encouraged me to join an art group in a neighbouring town, the Matadepera Col•lectiu d’Art, and participate in their art exhibition. All participants had to use a frame sponsored by the city council of Matadepera and newspaper in our works (left).

I’ve always wanted to work with text.  This was a much welcome challenge. It finally broke my artist block.

Tomorrow will be the inauguration of our exhibition. I’m so excited! I will keep you posted…