The Visible and the Invisible

Experiments with photo-luminescent pigments on tapa and fabric

The New Zealand company GloTech, Inc. has agreed to a part sponsorship of my Spirit Sail project with their rare earth photo-luminescent pigments. I asked for a small amount to experiment with. CCG Industries in New Zealand has in principle agreed to sponsor the binder for the final project but were unable to send over a small sample amount of heat-set medium for fabric painting. Instead, Elena Tavioni of TAV Ltd. in Rarotonga was so generous as to come to the rescue. 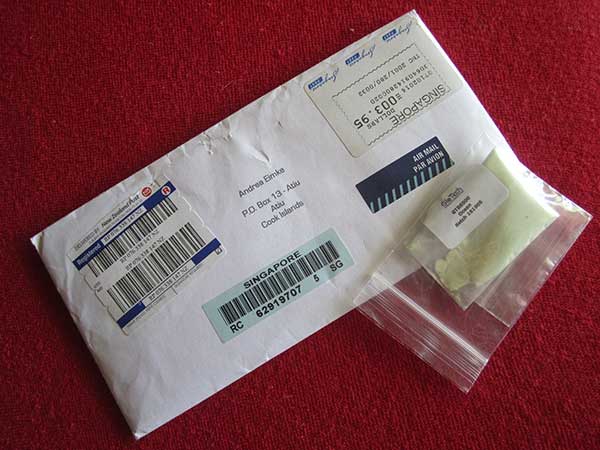 It took some time for the 20 g photo-luminescent pigment sample to arrive. The company had it sent over directly from Singapore. Elena let me have half a bucket (way too much) of the heat-set medium to mix the with the pigments to make a luminescent fabric paint.

I mixed the pigments in the ratio directed by the manufacturer. I first painted the thin part of a piece of white, lacy paper mulberry bark cloth and also the other end where the fibres are coarser and more densely spaced. That way I could appreciate the difference. My cotton mull dropcloth now has traces of the paint mix from seeping through the tapa. 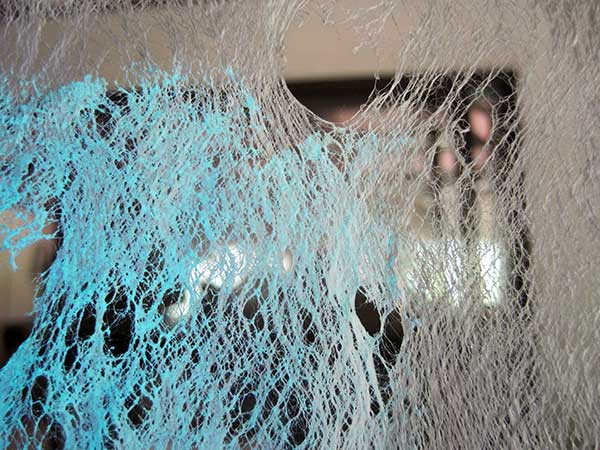 This photo was taken in plain daylight shining UV light on the tapa with a torch.

In normal daylight, the paint is hardly visible on the white tapa. I placed my samples outside in the sun to dry and charge with natural UV light. 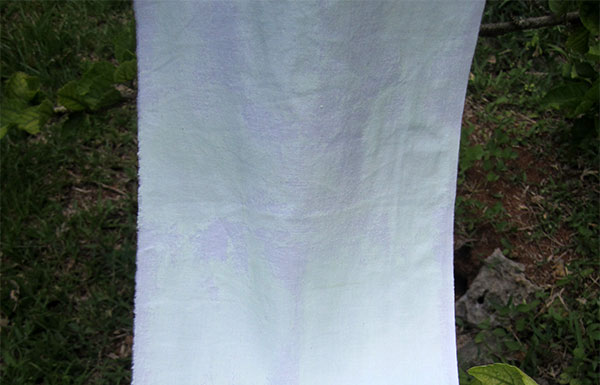 I also painted a small strip of white cotton fabric. The paint dries really fast. When the small amount was nearly used up, I thinned it with water twice so as not to waste anything and to see how the performance would change. It is difficult to discern the paint in daylight, but on the fabric it was visible having a slight greenish tint.

After about two hours the sun had wandered around the house and I decided to take my samples inside and check for an effect. I was richly rewarded by a beautiful glow (see featured image at top). The photo was taken in semi darkness. I placed the painted tapa on a piece of black tapa for contrast.

Entering a dark room with the fabrics was an amazing experience. The glow was very strong and even helped me find my way around the room in the darkness. I hung the three samples up side by side for photographing. I had to manipulate the photos on the computer to make the glow better visible. What we see in this photo is pretty close to what I saw.

I have learned from this experiment that it is OK to thin the medium which is water-based, because the pigment powder thickens it. In the varying intensity of the glow on the fabric strip we can clearly appreciate the thinning of the paint. The thinnest mixture is in the lines on the right. There was nearly no paint left but obviously still enough pigments to have some effect. I will experiment with a different ratio, using more medium and less pigment so that the paint can cover a larger area.

The difference in intensity in this photograph is not just caused by the difference in consistency of the tapa or the paint, but also because the left side of the photo shows the wrong side of the thin lacy part of the tapa. It was interesting to note that the luminescence can be observed on both sides of the transparent tapa.

The glow effect had disappeared after two hours, about the same time that the samples had been exposed to UV light. When exposed to daylight for about a whole day, the glow effect did not continue for so much longer. I look forward to living with a piece in with I incorporate photo-luminescent fabric. The painted fabrics will develop a different life at night.

The visual effect of these pigments makes me think of the mind. During the day it gets ‘charged’ with all sorts of experiences, the impressions of which are re-lived, in part, and worked through during the un-consciousness of sleep. The day-time picture dazzles us with a variety of sense perceptions and experiences. The night-time picture of the unconscious only leaves their essence. I have only just begun to think more about the expressive possibilities this photo-luminescent paint offers me. It will be fun to experiment some more… 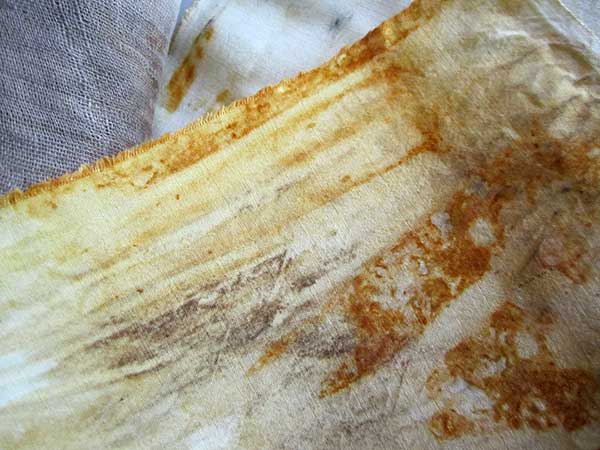 The reef clings to some major parts of the Edna. With the rising and falling of the tides, the water covers and uncovers them. Sometimes it is just a caress, other times a rather passionate bashing. If I wrap my fabrics around those, will the dye result be different, better even than that from the beached parts?

At the far end of the beach’s reef there is what looks like part of a skeleton, an iron spine with ribs protruding on either side. Contained in it is a long chain. I assume it’s the anchor chain.  No longer able to hold on to the support of the deep-sea bed, its links broke when wind and water pushed the Edna onto the reef. The chain has mostly lost its flexibility and is rusted solid and attached to the rib-like cage. Two narrow pieces of cotton fabric may soak up some of the wet rust that colours the remnants in all shades of yellow, orange, brown, charcoal and black. 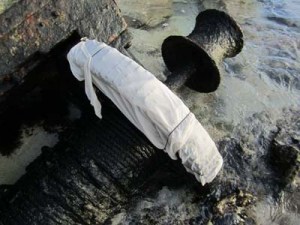 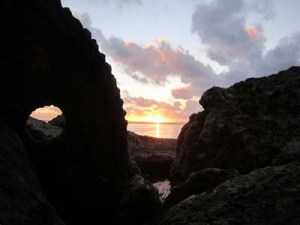 Closer to the Edna’s bow lies a winch. I am dreaming of the cog’s imprints, lines and lines of rust on my fabric… When I return the next day, the sea is rough – there were earthquakes in Chile and Hawaii – and my wrapping cloth seems gone. But Moana Nui a Kiva, the Big Blue Ocean, has just been mocking me. When the waters calm, I find my fabric submerged in between seaweeds and still attached by its safety chord. Hopeful I re-attach it again.

While the rib cage – as I have dubbed it – has given my cloths a beautiful golden-yellow coat with some rusty marks (see above), my dreams of regular rusty lines from the cog have not come true. Just a few red stains show up and some black smear which reveals why the winch is black and its rust doesn’t dye: decades of keeping it greased. I should have thought of that from the start! I must go and find out more about rust…

I enjoy this dialogue with the sea, the Edna and her resting place, these lessons which I learn from observation and inference. They make me feel humble and open to new experiences. They give me answers and create new questions.