In June 2018 I enrolled in a workshop at Terrassa’s wonderful art gallery Tigomigo. Its owner Paulo Cacais introduced us to the secrets of cyanotypie.

Cyanotypie is a photographic process that results in cyan or Prussian blue prints. It was invented in 1842 by Sir John Herschel. British botanist Anna Atkins used it immediately in a series of botanical books published in 1843. She can thus be considered the first (female) photographer. Blueprints were widely used for many decades in architectural offices until alternative methods were invented in 1942 . Artists still use it today. 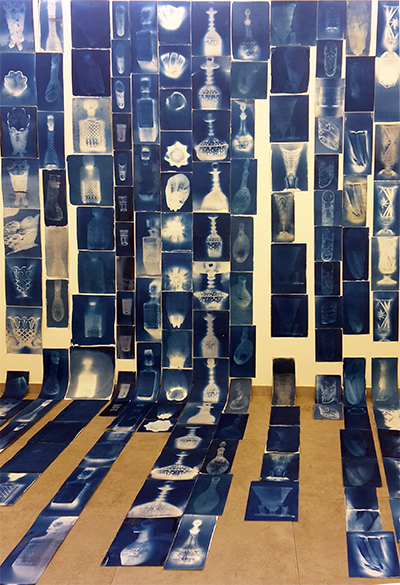 During my visit to Tel Aviv at the end of 2017, I was fortunate to meet the artists Rachel Eretz and Lucy Elkivity in their studio and admire their co-operative blueprint works (left). The technique resembles the sun-dyed pareu we used to make in the Cook Islands. I became curious to find out if I could use this method on tapa.

I took some pieces of Tongan tapa with me to the workshop. In his dark room, Paulo showed us how to dissolve small amounts of potassium ferricyanide and ferric ammonium citrate in warm distilled water and apply the greenish solution with a brush to the surface of our substrates. The prepared pieces were then left in a dark place to dry. 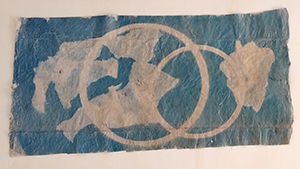 My first idea with embroidery frames and gauze fabric did not give good results, since it had to be kept inside so the wind would not blow it away and could thus only be developed through the window. 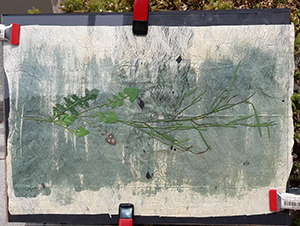 On a supporting frame, under glass plates held in place with clips I could then arrange my printing material on the dried substrates. I opted for plant material which I found outside the gallery.

Paulo had the great idea to scan my hand, print it out on transparent paper and use it as a “negative” that the sun could develop. It is amazing how quickly the colour of the chemicals turns from a light green to a greyish blue right and beyond. 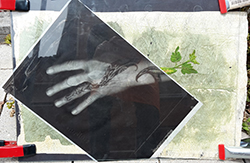 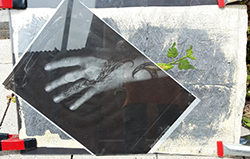 If left in the sun long enough, one achieves a beautiful dark Prussian blue, while the parts that the sun can’t access remain white (or the colour of the substrate). 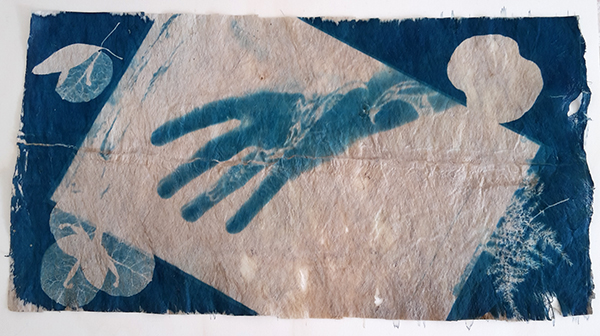 To dry the developed “photographs”, the wet pieces were just stuck to the large window of the gallery. I was so pleased with the outcome that I could not help but take a selfie… 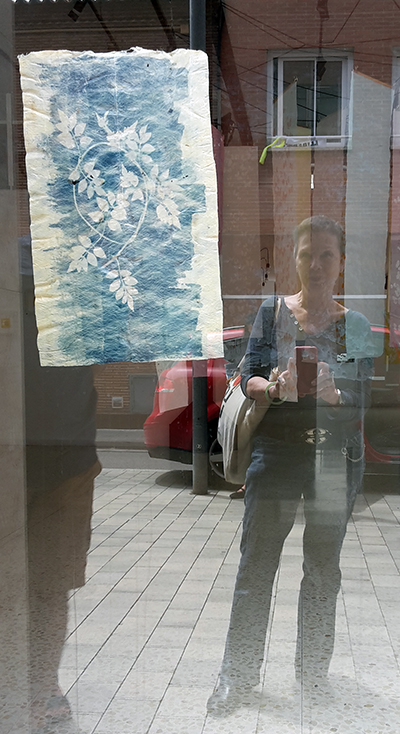