From questions following my earlier post I can see that there is a need to explain how we on Atiu make anga (the Cook Islands word for barkcloth or – as it is commonly known – tapa). Thanks to the taunga (experts) of our island and the teacher and senior art students of Enuamanu School, during a special workshop in 2013 I was able to shoot these detailed photographs that now help me to illustrate the process.

On Atiu, paper mulberry (Broussonetia papyrifera, which our people call aute) is nearly extinct. Our people use the inner bark, also called bast, of the aerial roots of the banyan (ficus prolixa, on Atiu called ava), stems and branches of breadfruit (artocarpus altilis, CI Maori kuru), and dye-fig (fictus tinctoria, on Atiu mati) instead. Since banyan and dye fig trees grow wild on the island’s raised fossilized coral reef, harvesting is not an easy task.

In this cross-cut of a banyan root we can clearly distinguish the white wooden core and the thick layer of bast that sits under the thin outer bark. It is the bast that gets beaten. Raw banyan bark cannot just be pried off the wooden core like most other barks can. The roots therefore need special preparation. 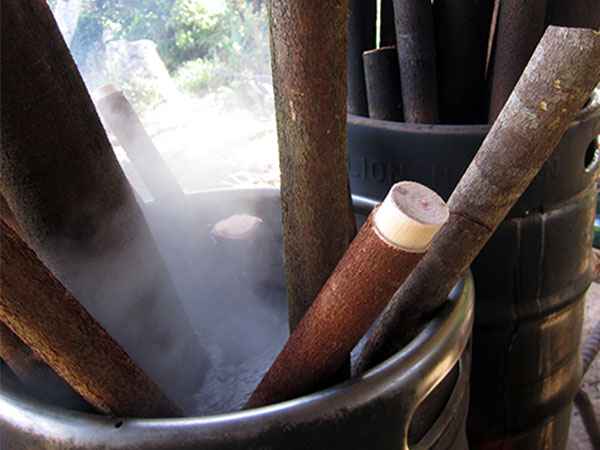 The most common way, if you only need short pieces of bark, is to boil the sticks in water. The heat eventually shrinks the bark away from the wood and thus makes it easy to get it off . Longer roots can be carefully heated on an open fire, or steemed in an earth oven to achieve that same effect.

The bark of the stem/branch/root is cut lengthwise to peel off the bark. In the photograph we see dye fig specimens.

Different methods are used according to plant species and country. Sometimes, the entire bark is removed, a horizontal slit is cut across the outer bark, which is then carefully peeled loose…

…before it can be torn off the inner bark, much like skinning an animal. 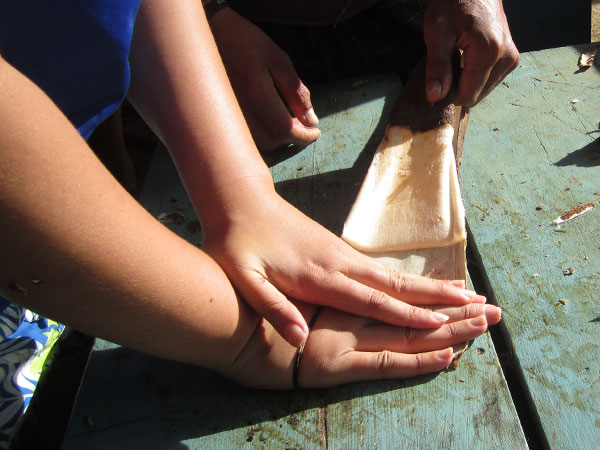 This is best done with someone else’s help and requires strength and skill.

When I worked with a small sample of rubber tree aerial root during the Marquesan tapa artist Sarah Vaki’s workshop at the 2014 Tahiti Tapa Festival, I was shown not to cut off the outer bark, as the Atiu boys do… 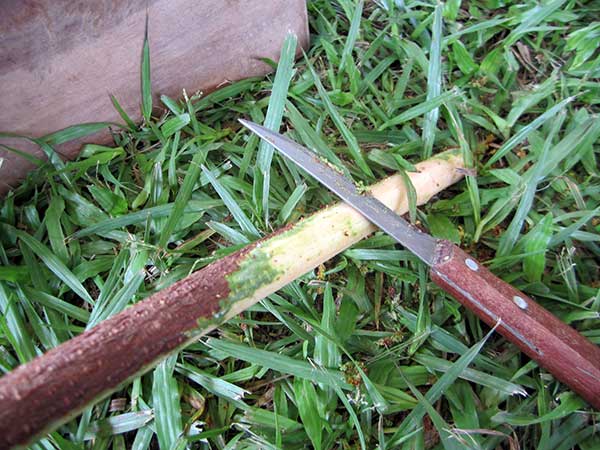 …but to carefully scrape it off until all the green matter is gone and the white bast is revealed. The more bast there is, the wider my finished cloth can be. 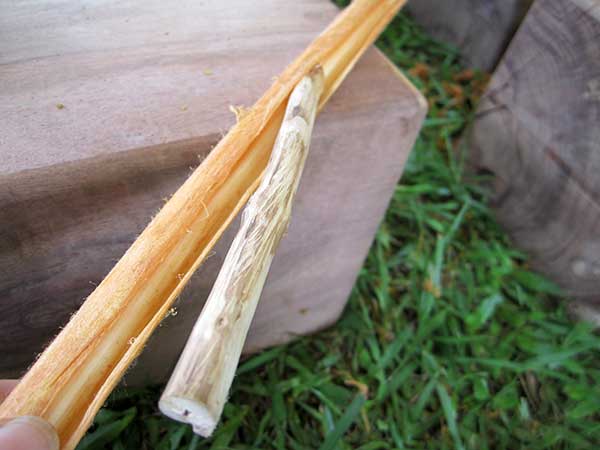 Sarah used a clever tool, a stick of guava wood, which is very hard, with a diagonally cut end. This helped me to pry off the bark. It looks so easy when experts do it, but I had to be very careful not to damage the bark in the process. 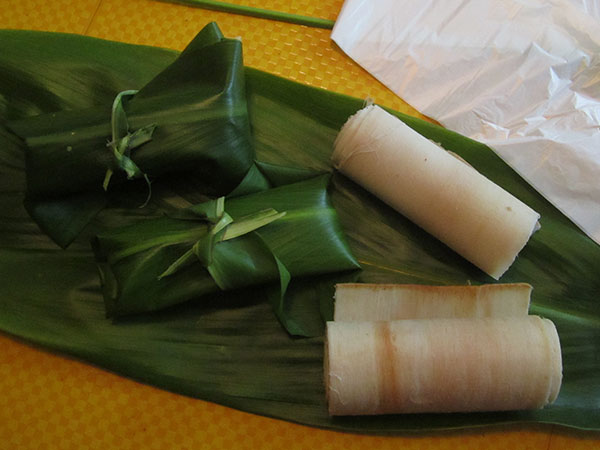 The bast is washed, kept moist and can then be processed further. For storage, it is rolled up inside out, wrapped in ti leaves (cordiline terminalis) or banana leaves and, gathered in a plastic bag, it keeps well in the freezer until it is needed. In less humid climates or places with air condition, if can also be dried for storage. 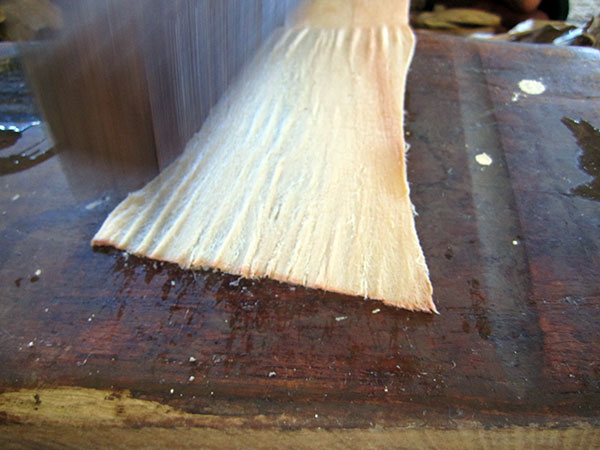 The fresh bark can be beaten directly. On Atiu we use square hardwood beaters, called ike, which have four different sides with length-wise incisions. The side with the widest ridges is used for the first breaking open of the fibres and softening of the bark. As the bark grows, the sides with the narrower incisions are used and the beating becomes gentler to insure that the resulting cloth gets a smooth and even surface. 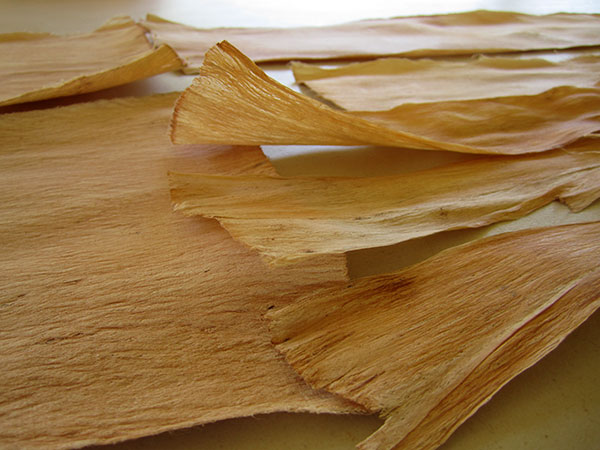 Once the bark has been beaten evenly throughout and has reached its largest possible with, it is spread out flat to dry. Exposing it to the sun will darken and harden the bark. That’s why I prefer it to gradually dry in the shade. It is important to keep finished tapa dry so that it doesn’t get mouldy, so airing it from time to time is a good idea.

For special projects and a much smoother bark to work with, it is necessary to go through some more preparation before the beating process can begin. I will write about this my next post.