…are wonderful moments. Everything is still possible. The mind is free to wander – and wonder how to fill an empty page with something meaningfull. I have reached such a moment, the beginning of a new project. This blog will be a visual diary through an exciting creative journey that I have  embarked on. I welcome you as my passengers, commentators, advisors and critics. 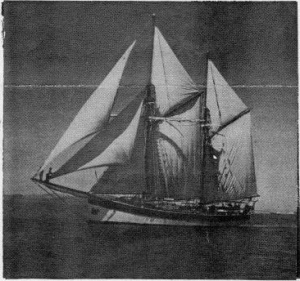 Protagonist in my visual narrative is Edna, a Dutch-built schooner that was beached at Ava Tapu, the ‘Sacred Harbour’ on Atiu, in November 1990. M/S Edna was chartered by the Ngaputoru Shipping Company to service the Cook Islands’ Southern Group islands. Overnighting at Atiu harbour before continuing her voyage to neighbouring Mitiaro, a change of wind and strong currents pushed the vessel on the reef of the tiny beach just next to Atiu’s harbour. Though no life was lost, most of the uninsured cargo was beyond salvaging.

Later hurricane-force winds wedged the broken remains into a passage in the fossilized coral rocks, blocking the access passage to an ancient sacred site. At Orongo Marae i Tai, Atiu people once welcomed visitors (or slayed invaders). A multitude of scattered pieces can be found buried along the tiny beach and on the reef. It looks as if the island has been slowly ‘incorporating’ Edna as a ‘permanent resident’.

In the following weeks and months, I will present more background information, describing in  detail how my new project involves the Edna and documenting the work’s progress. I appreciate your interest and comments.